The Eiffel Tower has dominated the Parisian horizon for more than 130 years, with a fame and attraction that seems never to dim — quite the contrary, in fact. Although it is now admired around the world, its beginnings were rather more difficult.

The eventful history of the Eiffel Tower

Origins of the project

The iconic symbol of France and Paris actually has its roots in… the United States! For the 1876 Centennial International Exhibition in Philadelphia, a team of American engineers imagined constructing a tower that was more than 300 metres tall. Their project was quite different to the Eiffel Tower that we know today. The project ultimately never came to fruition, but it inspired others, including the Eiffel company, which specialised in large metal structures, specifically iron, and gave its name to the tower.

Opposition to the Eiffel Tower

While today Paris wouldn’t be Paris without the Eiffel Tower, responses to the plans for the 300-metre structure were not initially unanimously favourable.

Many people soon questioned the aesthetics and usefulness of the tower. The newspapers doubted the solidity of the building, and bet on its failure with sensational headlines such as "The Eiffel Suicide" as soon as something happened to delay the construction.

Finally, the inhabitants of the Champ de Mars district, frightened by the idea that the tower might fall on them, went so far as to sue the State.

Many cultural icons, such as Emile Zola, Alexandre Dumas, and Charles Gounod, opposed the project. Guy de Maupassant, who despised the edifice, regularly ate lunch in the Eiffel Tower‘s first floor restaurant as it was the only place in Paris where he could eat without seeing the metal structure he hated so much.

The Unknown Fathers of the Eiffel Tower

Two engineers can be considered the ‘fathers’ of the Eiffel Tower: Maurice Koechlin and Émile Nouguier and the architect Stephen Sauvestre. Gustave Eiffel‘s role in this project was to bring it to the attention of French political leaders, and to obtain their consent to construct the tower for the 1889 world’s fair in Paris.

This exhibition was important as it coincided with the centenary of the French Revolution, and the Republic wanted to make it an unforgettable event.

Construction of the Eiffel Tower

Initially, Gustave Eiffel had planned twelve months of work; in reality, it would take twice that time. The construction phase, which began on 28 January 1887, was finally completed on 31 March 1889, just before the official opening of the Universal Exhibition.

It took two years, instead of one as initially planned, to raise the square-based iron structure and give the city of Paris this now indispensable landmark. Since its inauguration, the Eiffel Tower has welcomed more than 200 million visitors.

A symbol of alliance, the Tower's rivets bear witness to its historical heritage.

The rivets were set by a team of four "riveters": one to heat it, one to hold it in place, one to form the head, and one to complete the crushing with a sledgehammer.

Scientific use and experiments

From the moment he presented his project in 1886, Gustave Eiffel knew that the scientific utility of the Tower could, at that time, preserve it from its adversaries and prolong its life.

Initially, it was to be destroyed after 20 years! He then specified the Tower's vocation: meteorological and astronomical observations, physics experiments, strategic observation post, optical telegraph communication post, lighthouse for electric lighting and wind studies.

On 5 November 1898, Eugène Ducretet carried out the first wireless telegraphic tests between the Eiffel Tower and the Pantheon (4 km away). The transmitter station was installed at the top of the Tower. In 1899, the waves crossed the English Channel for the first time.

In 1913, the Tower sends, by electric waves, dispatches as far as America and to ships making the crossing, within a radius of 6,000 km.

The TSF during the First World War:

In 1914, during the Battle of the Marne, the Tower radiotelegraph station learned that General Von Marwitz, commanding the right wing of the German army, was experiencing logistical problems and consequently halting his advance.

This vital information enabled the French command to organise a victorious counter-attack.

Thanks to the Tower station, important enemy radiotelegrams, sometimes hidden under commercial guise in the broadcasts of neutral countries, were deciphered. Spies were unmasked, among them Mata Hari.

From 1921 onwards, a transmitter broadcast, initially on an experimental basis, music programmes, chronicles and finally a "Journal Parlé" as soon as 1925, picked up by amateurs on simple crystal sets. Radio Tour-Eiffel was well known to Parisians at the time.

Experimental broadcasts were organised and artists such as Sacha Guitry and Yvonne Printemps were invited.

Today, the top of the tower serves as a digital TV antenna, broadcasting 45 TV channels and 32 radio stations.

Gustave Eiffel had seventy-two names of scientists, engineers or industrialists who honoured France from 1789 to 1889 engraved.

These names are displayed in gold letters in relief on the periphery of the first floor.

In the end, little is known about how the scientists were chosen: there is no order, no hierarchy, and no explanation of why a particular name was chosen!

An exceptional place for gourmets

Today you can have lunch or dinner in the monument. There are two restaurants inside the tower. On the first floor is the “58 Tour Eiffel” (58 refers to the number of metres between the restaurant and the ground), and on the second is a gourmet restaurant called “Le Jules Verne“, which has a star in the famous “Michelin Guide” and is now headed by chef Frédéric Anton, who took over from Alain Ducasse.

Today, the Eiffel Tower remains the undisputed star of landmarks, and it’s not surprising that it is the most-visited monument in the world with an entrance fee.

Obviously, Tootbus buses make an essential stop at the Eiffel Tower, so that you can enjoy the majestic Iron Lady.

The Eiffel Tower can also be admired from the Seine, and offers you a completely different perspective! Complete your visit of Paris by bus with a cruise on the Seine at a low price, thanks to our Paris Essentials package. 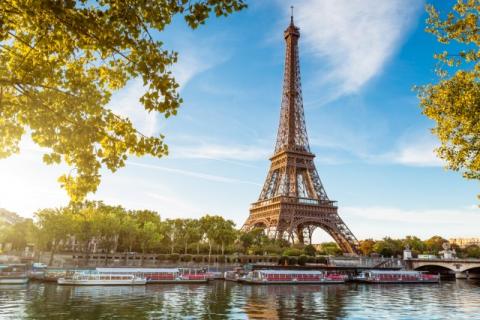